We had already covered the basic overview of Xcode and now we are going see the steps required for creating an sample iOS Project that displays Welcome message on Xcode simulator.

Step 2: In the Choose a template for your new project, pick Single View Application under the IOS section and click the Next button.

Note :- We will cover the different templates in detail in future tutorials.

Step 3: Now in Choose options for your new project, enter the name for your project, organisation name and company identifier. In the Devices drop down select iPhone and mark the check box with caption as “Use Storyboards” and “Use Automatic Reference Counting” and click Next button.

Step 4: Specify the location for creating this project and click the Create button.

Now a new project should be created and you should see a screen as shown below.

Step 5: Select the MainStoryboard.storyboard in the Navigator Pane to access the Interface Builder.

Step 6: Navigate to Utilities section and click Object tab. Scroll down and pick label control from the list then drag and drop the label on to Interface Builder.

Step 8: Select Run option on Xcode toolbar or use the keyboard combination of command + R to run the sample project on Xcode simulator for iPhone. command + R will first compile and build the project before launching it on the simulator.

iOS Simulator in Xcode can be used for testing iOS apps before trying the apps on a live device. Listed below are the different settings and features on iOS Simulator.

iOS Simulator can be launched by executing Program on Xcode

The screenshot of IOS Simulator is shown below. 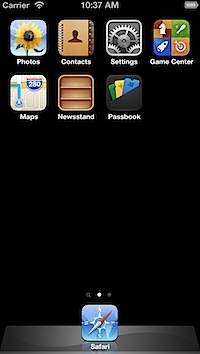 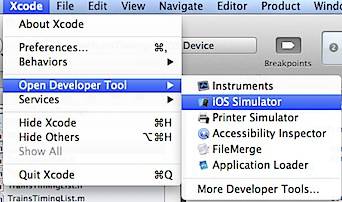 Reset Content and Settings option clears all the apps and settings from the simulator. For example if you have changed the app icon, the new icon will not be displayed unless you delete the app from the simulator and re-run the program.

You can also delete individual apps by clicking and holding the installed apps followed by clicking delete mark just like you do on any iOS device.

Choosing the device screen on Simulator

It is always recommend to try out the apps on the different device simulator before releasing it on the App Store. For example if you are developing an app for the iPhone then you need to try out in all the 4 iPhone device simulator apart from testing your app on live device.

IOS Simulator also provides option to copy the individual screen from the simulator using the option available as part of the Edit menu.

IOS Simulator has features that lets users to see the behaviour of the app on each action such as Rotating Screen to Left, Rotating the Screen to Right, Shake Gesture, Accessing the Home Screen, Locking the Device and also simulating low memory warning.

Location menu option under the Debug menu is quite useful for development of location based apps. This lets developers to simulate location required for testing their app.

IOS Simulator screen size can be increased and decreased based on your need using Window -> Scale menu option.

Now if you want to provide a proper name to the FirstViewControllers and SecondViewControllers you can use the Rename option available under the Edit menu.

Step 1: Navigate to FirstViewController.h and select the name after interface keyword.

Step 3: Enter the name then select Rename related files and click the Preview button. This would display the list of files and location where the rename would affect.

Step 4: If you are happy with Preview then save the changes.

By this way you can rename the default view controller and their related files (.h, .m and XIB) in Xcode.

Xcode by default displays project file in a seperate window when the user double clicks on the file. And if you want to change this behavior and to open the file in the same window as that of single click then you can use the options provided as part of Xcode Preferences.

Now when a user double clicks on a file, XCode will display the file in the same window.

Xcode is one of the powerful IDE for IOS development and by default it supports code completion suggestion. Code completion feature suggests users with possible code substitution when you start typing first few letters of code in Xcode editor.

For example, if you have UILabel reference variable and start typing “t” after the dot then the above code completion popup will be displayed. Now you can quickly pick up your desired attribute from the list.

In case if you do not prefer the code suggestion and find it more annoying then you can disable this option using the Xcode Preferences.

In the Preferences window, navigate to Text Editing Preferences then Code Completion under the Editing section.

Unmark the check box with caption as “Suggest completion while typing“. This should turn off the code completion feature in Xcode.

When ever a new project is created in Xcode, the projects files like header and implementation files will have auto generated comment section at the top of the file. This comment section will have information such as file name, Project name, Author and Organization name. 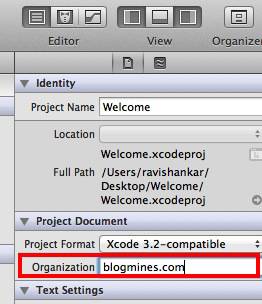 Now if you add any new file to this project then the auto generated comment will have the company name as “rshankar.com”.

Now when ever a new project or new file is added in Xcode, the Organization name will be set the value provided for company name in address book.

Please note that any files created before this change will not get affected and you will have to manually update company name.

Complete Python Bootcamp: Go from zero to hero in Python 3